Jacob Weik came to America to make a better life for himself and his children. He is my great-great-grandfather the immigrant from Germany. It has taken me decades to discover who this man was and to put the pieces together (like a jigsaw puzzle). It is so ironic to me that the years I spent living in LaSalle County, Illinois as a child never knowing that my father Merle Otto Weik had relatives in Stephenson County all the time we lived in Illinois. I had to move several hundred miles to Missouri to begin looking for Jacob.

My mother Nancy Gertrude Brumley Weik and I had very little information to go by when researching the Weik family. Everything I knew was the relatives in and around Manhattan, Riley, Kansas. We had the Death Certificate of my great-grandfather John Edward Weik which told us his parent’s names and the city he was supposed to be born in Freeport. I began to write to the Stephenson County Historical Society and joined up to receive newsletters. I then began putting queries in their newsletters about Jacob or any of his family members.

Emails were just getting started and one day an email came to me from Doris Arline Weik – my second cousin 1x removed. She had seen my query or someone told her about me and we started sharing our information about the Weik’s. She sent me the obituary in English on Jacob Weik. I was thrilled that I had made a connection with her and that we could finally put together information on Jacob. We exchanged emails for a while and then emails stopped because she had sent me everything she had on him.

Then one day I got an email from Timothy P Weik, my third cousin, telling me Doris had died and when he was sorting through her genealogy paperwork discovered the old emails I had sent her. He was now doing genealogy on the Weik family and wanted to know if we could collaborate with one another and I said yes. This is what got me to this blog post.

Jacob Weik was born November 29, 1813, in Karlsruhe, Karlsruhe, Baden-Wurttemberg, Germany. I believe his parents were Michael Weick and Marie Salome Schumacher and at least two of his siblings were Johannes 1811 and Eva Katharina Clara Weik 1817 both born in Germany. Both of his parents and Eva died at young ages. It is not known who Jacob went to live with as a child.

Jacob arrived in America around 1854 and he knew from the start he wanted to become a citizen of the United States of America.

On August 30, 1856, he swore to claim the United States of America his home country and renounced his allegiance to Germany.

On September 20, 1859, Jacob Weik became a Naturalized Citizen of the United States. I don’t believe Gertraud ever became a naturalized citizen, I have no proof and haven’t been able to find any paperwork on her at this writing. I can only imagine the feeling Jacob must have had as they were swearing him in as a citizen, it had to have been a dream fulfilled.

From 1859 until his death on January 11, 1876, Jacob and Gertraud remained in the Freeport, Stephenson, Illinois area. Jacob was sixty-two at the time of his death and was buried in the St. Joseph Catholic Cemetery in Freeport. I visited with my cousin Tim Weik a couple of years ago and he took me to the cemetery and to the land Jacob once farmed in Cedarville, Illinois, my dream of seeing this with my own eyes was fulfilled as well. 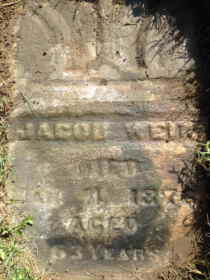 Please feel free to share this post with family and friends. If you have questions or wish to add any new information please email me.