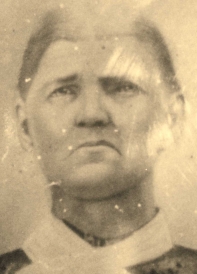 Ellen Illinois Bell Brumley was my second great-aunt, she was born in Mississippi on Christmas Day, December 25, 1841. Her parents were William Bell and Miss Gerlt. I have not discovered a lot about her except when she entered the Brumley family. Her father was born in Tennessee and her mother was born in Illinois, probably the reason for her middle name of Illinois.

There is not much out there on Ellen from 1841 to 1859. She married her first husband William P Lenox on March 29, 1859, in Maries County, Missouri. This union brought two sons, William Jackson, and Eugene Houston Lenox.

William entered the Civil War as a Private fighting for the Union assigned to the 1st Regiment, Missouri Light Artillery. I have no proof that he died during the war but his death date of October 31, 1864, and where he died in Greenville, Catahoula, Louisana certainly suggests he was in the war and died in one of the battles or of disease like so many others.  His body was returned back to Hayden, Maries County, Missouri for burial. Ellen was a young widow of twenty-two with small children to raise.

Ellen Illinois Bell  Lenox married for the second time to Thomas Hart Benton Blackwell on September 6, 1868, in Maries County. As far as I have researched I have not found any children born to this union. Their marriage only lasted six years when Thomas died on March 24, 1874, in Hayden, Maries, Missouri.

Ellen was now a widow for the second time until she meant and married my second great-uncle William “Bill” Brumley in 1881. They had one child America Layna Ethelyn Brumley in 1882. They lived in the Dry Creek area of Maries County and spent thirty-six years together before on May 9, 1917, Bill Brumley died.

She never remarried again but enjoyed her daughter and her two grandchildren. Ellen passed away on July 28, 1924, in Hayden, Maries County at the age of eighty-two years old and is buried in Kenner Cemetery alongside Bill.

I have started my blog again with updates on my favorites posts. Please share these posts with family and friends. If you like Brumley Family Branches, please sign up to receive future posts. If anyone has any information to add about Ellen Brumley please contact me by email.
Thank you.

Events and resources in and around Stephenson County, Illinois

“There are two lasting bequests we can give our children: One is roots, the other is wings.” Teaching children values and giving them the opportunity to excel is essential to good parenting. However, I feel I must also provide my children (and myself) insight into the ones who came before us: our ancestors whose lives and stories have shaped us into who we are. This is my journey; these are their stories…

solving family history one branch at a time.