Harry William Peter was my great-uncle and I always remembered him as being a soft-spoken man. I was a child during the time I knew him and he was a person who loved to make things out of wood. I remember on one visit he gave me a wooden bowl he hand made and I cherish it to this day. He had his workshop out in this detached garage.

His family was part of the Swedish population that settled in and around Manhattan. Just like my German relatives did but they worked and lived beside each other usually as farmers.

Harry meant and married Ina Grace Pultz (my great aunt) on January 17, 1909, in Riley County, Kansas. They did not have any children but enjoyed the many nieces and nephews and other relatives throughout the years.

When WWI was on the doorstep of the United States Harry registered for the Draft on September 12, 1918. He was thirty-two years old.

And when WWII was going on he signed up for the Draft in 1942, he was already working at Fort Riley, Geary, Kansas as a Quartermaster of Utilities. As far as I have discovered I don’t think he ever saw active duty or was sent abroad to fight in either war. He was fifty-six years old.

Harry and Ina Grace continued to live in the area where they were close to family. They enjoyed many family functions, birthdays, anniversaries, Pultz Reunions, etc. It was all about family.

Harry was also very involved in the Farmers Lodge No. 166 AF and AM of Randolph, Riley, Kansas along with his brothers. The three brothers each served fifty years or more in this organization and were rewarded for their years of service.

Harry and Ina always were together even in their later years in the nursing home, but on January 2, 1978, Harry died. He was ninety-one years old and had lived a very rewarding life. He was buried at Sunset Cemetery in Manhattan, Riley, Kansas. 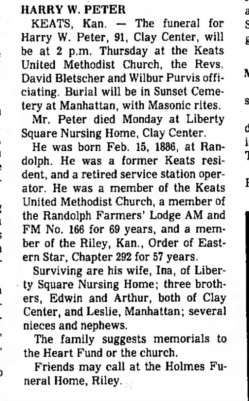 I remember going into his workshop once and he had every tool you could ever imagine to do his woodworking. He had developed his craft over the years that everyone was thrilled when he shared his woodworking with family and friends. My mother had a bowl that he made her and I now have that piece as well as my own.

Posts of the Past

The National Institute for Genealogical Studies

Blogging the complicated lives of my ancestors