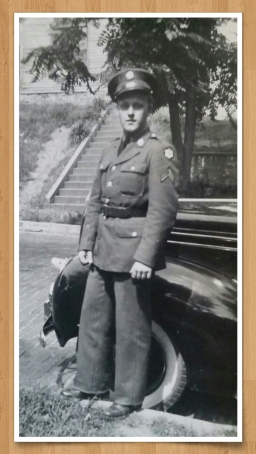 Nellie Opal Sells Brumley and Sylvia were sisters. My mother Nancy Gertrude Brumley often told me stories about her mother and Sylvia as sisters growing up in Iowa and Missouri.

In the 1930 Census of Missouri, the family was living in Springfield, Greene County and also in the 1940 Census. Billie was now eighteen years old and was a Delivery Boy.

When WWII came knocking at United States door Billie filled out his Draft Card Registration at the age of nineteen. On February 27, 1942, he enlisted as a US Army Private at Jefferson Barracks, South of St. Lous, Missouri. He was single without dependents.

It is not known why he was in Monmouth, New Jersey on May 12, 1943, except maybe he had to report for duty somewhere on the east coast. I remember my mother telling me that for some unknown reason he got into a fight and was killed. He was Irish and with that sometimes comes a temper he could not contain. He was a young man of twenty-two years old. He was brought home for burial in the Springfield National Cemetery in Springfield, Greene, Missouri.

I have started up my Brumley Family Branches Genealogy blog again and have updated some of my favorite posts. Please feel free to share this post with family and friends. If you have questions or wish to add any new information please email me.